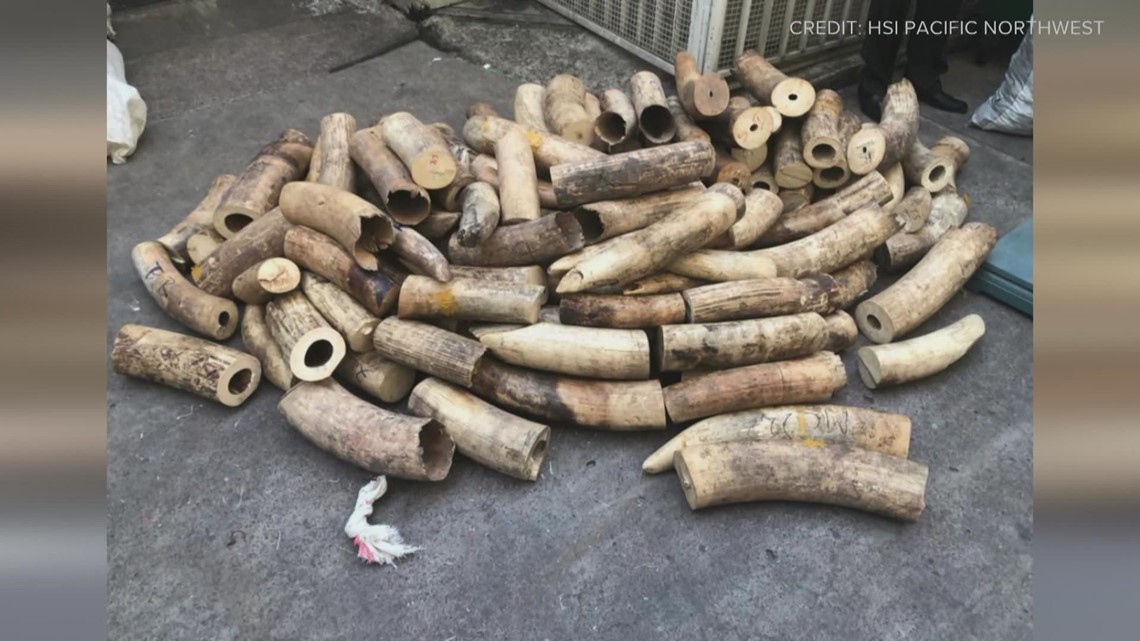 The investigation led to the seizure of $3.5 million dollars worth of elephant ivory, white rhinoceros horn, and pangolin scales.

SEATTLE — The multi-billion-dollar industry of illegally trafficking wildlife was front and center in federal court on Tuesday morning.

The Homeland Security investigation led to two foreign nationals being arrested in Edmonds in November of 2021. On Tuesday, Herdade Lokua learned he would spend the next 20 months in prison, and Jospin Mujangi was sentenced to 14 months.

The investigation led to the seizure of $3.5 million worth of elephant ivory, white rhinoceros horn, and pangolin scales.

Lokua and Mujangi, both from the Democratic Republic of Congo, allegedly admitted that beginning in 2019, they agreed to smuggle the contraband into the United States. The investigation also found that they cut up the ivory, painted it black, and falsely labeled the packages as containing wood.

University of Washington Professor Sam Wasser’s research was used in the investigation. When KING 5 interviewed him last year, Wasser explained how he uses genetic testing of illegal ivory shipments seized by law enforcement to uncover the international criminal networks behind the trafficking.

“These big buyers are buying large quantities of ivory hoping that the elephants are eventually going to go extinct and it will be legal to sell their ivory. Then it will be like gold,” said Wasser.

The University of Washington highlights a 2016 report from the International Union for Conservation of Nature that cited ivory poaching as a primary reason for the loss of about 111,000 elephants between 2005 and 2015.

As for this case, Robert Hammer, the Special Agent In Charge for Homeland Security Investigations across the Pacific Northwest, said, “we were able to work with the State Department and our international partners to really set up a ruse to get them here to the United States.”

Hammer says the men traveled to Edmonds thinking they were going to meet prospective buyers.

“At the end of the day, they were HSI undercover agents, willing to receive them here in Seattle and then seal the deal, to confirm their criminal intent,” Hammer said.