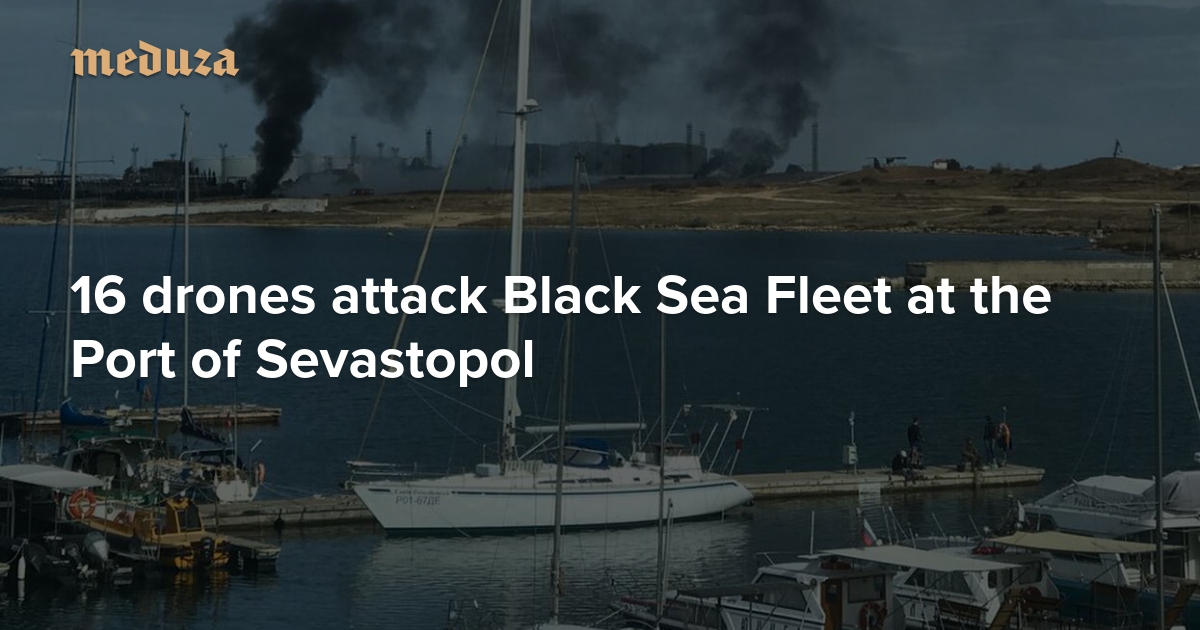 The Russian Ministry of Defense reported an attack by unmanned aircraft on the Port of Sevastopol. In the morning of October 29, nine flying unmanned craft and seven “autonomous marine unmanned devices” attacked Black Sea Fleet ships at anchor in the city. Seven of the 16 drones were shot down. The defense ministry reports that the marine minesweeper Ivan Golubets and a floating barrier sustained “minor damage.”

The ministry called the attack terrorism. It also says that fighters from the 73rd Special Naval Center of the Ukrainian navy carried out the attack, allegedly under the guidance of “British specialists” located in the city of Ochakiv, in the Mykolaiv region.

In response to the attack, Russia indefinitely suspended its participation in a deal concerning the export of Ukrainian grain through the Black Sea. The Ministry of Defense justified the decision, claiming that war ships and civilian boats involved in ensuring the security of the “grain corridor” were affected by the attack. Russian president Vladimir Putin has previously repeatedly claimed that the exports protected by the deal did not reach the world’s poorest countries, contrary to the original agreement.

Sevastopol governor Mikhail Razvozhaev called today’s drone attack the largest such attack on Russia since the start of the war. After the incident, Razvozhaev also threatened people who posted videos of similar incidents on the Internet. According to him, Ukrainian Armed Forces can obtain information about Sevastopol’s defense systems from the clips. “Special services will deal with the individual clips that allow the enemy to detect the city’s defense systems,” he said. He also said that residents will no longer be able to receive broadcasts from the city’s surveillance cameras.

Commenting on events in Sevastopol, the Ukrainian army recalled recent remarks by Russia’s permanent representative to the UN about “combat mosquitoes.” Natalia Gumenyuk, head of the press office for Ukraine’s southern command, said “While there’s no official confirmation, there’s a clear understanding that fear of ‘combat insects’ and the use of aggressive air defense systems against them might produce a backlash.” Her comments refer to Vasily Nebenzya, Russia’s permanent representative to the UN, who said yesterday that Moscow had information about US-patented drones capable of spreading mosquitoes infected with dangerous viruses.

One of the official Telegram channels of the Ukrainian Armed Forces also commented on events in Sevastopol. The post seemed to assume that the frigate Admiral Makarov, which became the Black Sea Fleet’s flagship after the loss of the Moskva, had been damaged. “But the information needs additional confirmation,” it said.

According to the Russian Ministry of Defense, UK naval forces helped organize the attack. The ministry alleges that the UK is also involved in the Nord Stream explosions, which happened in September. According to the ministry, “representatives” of a British naval unit located in the city of Ochakiv, Ukraine “took part in planning, supplying, and implementing a terrorist attack in the Baltic Sea on September 26, to blow up the Nord Stream 1 and 2 gas pipelines.”

Russian president Vladimir Putin has previously blamed damage to the pipelines on “Anglo-saxons.” “It’s clear to everyone whom this benefits. Whoever benefits from it, did it, of course” Putin said. He also said that someone who was “technically capable of making such an explosion, and who had already resorted to sabotage, been caught, and gone unpunished” could be responsible for the explosion. According to him, the beneficiaries are Poland and Ukraine (Russia’s remaining gas lines to Europe run through their territory), and also the US “which can now supply energy at high prices.”

The British Minister of Defense tweeted that its Russian counterpart is “peddling false statements of epic proportions.”