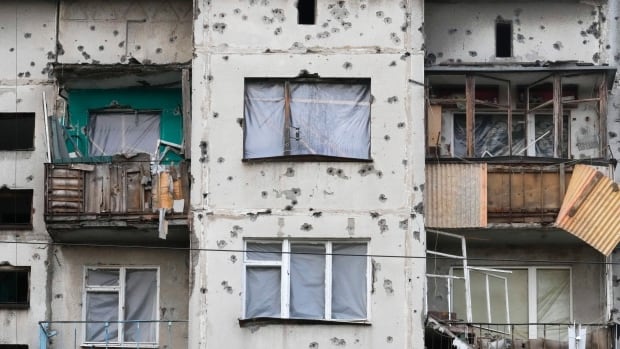 Russia announced on Saturday that it will immediately suspend its implementation of a United Nations-brokered grain deal that has seen millions of tonnes of grain exported from Ukraine and has brought down global food prices. Ukraine accused Russia of creating a world “hunger games.”

Ukraine has denied the attack, saying that the Russians mishandled their own weapons.

The Russian declaration came one day after UN Secretary General Antonio Guterres urged Russia and Ukraine to renew the grain export deal, which was scheduled to expire on Nov. 19. Guterres also urged other countries, mainly in the West, to expedite the removal of obstacles blocking Russian grain and fertilizer exports. 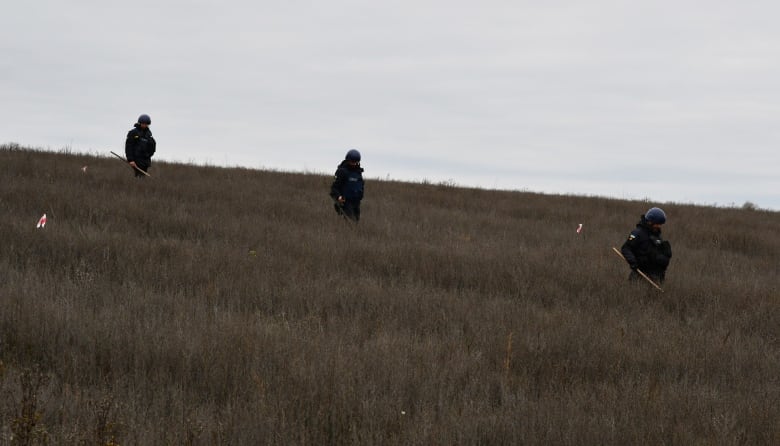 Ukrainian soldiers check for explosives outside the liberated town of Sviatohirsk in the Donetsk region on Saturday. (Andriy Andriyenko/The Associated Press)

The UN chief said the grain deal, which was brokered by the United Nations and Turkey in July, helps “to cushion the suffering that this global cost-of-living crisis is inflicting on billions of people,” his spokesperson said.

UN officials were in touch with Russian authorities over the announced suspension.

“It is vital that all parties refrain from any action that would imperil the Black Sea Grain Initiative, which is a critical humanitarian effort that is clearly having a positive impact on access to food for millions of people,” said Guterres’s spokesperson, Stéphane Dujarric. 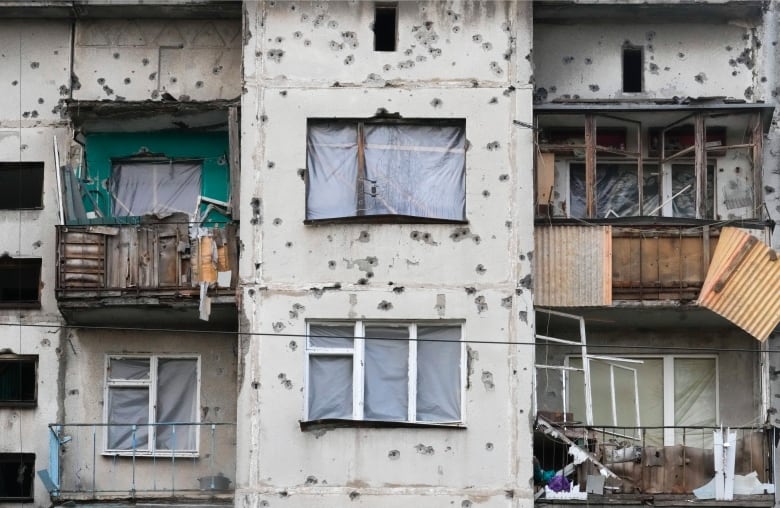 Markings from shrapnel, due to Russian rockets, are shown on a multi-storey building in Slavyansk, in Eastern Ukraine’s Donetsk region, on Saturday. (Efrem Lukatsky/The Associated Press)

“This is a transparent attempt by Russia to return to the threat of large-scale famine in Africa and Asia,” Zelenskyy said Saturday in his nightly video address. He called for a tough response against Russia from international bodies like the UN and the G20.

Russia’s Foreign Affairs Ministry on Saturday accused British specialists of being involved in the alleged attack by drones on Russian ships in Crimea.

Britain’s Defence Ministry had no immediate comment on the claim.

“In connection with the actions of Ukrainian armed forces, led by British specialists, directed, among other things, against Russian ships that ensure the functioning of the humanitarian corridor in question (which cannot be qualified otherwise than as a terrorist attack), the Russian side cannot guarantee the safety of civilian dry cargo ships participating in the Black Sea initiative, and suspends its implementation from today for an indefinite period,” the Russian statement said. 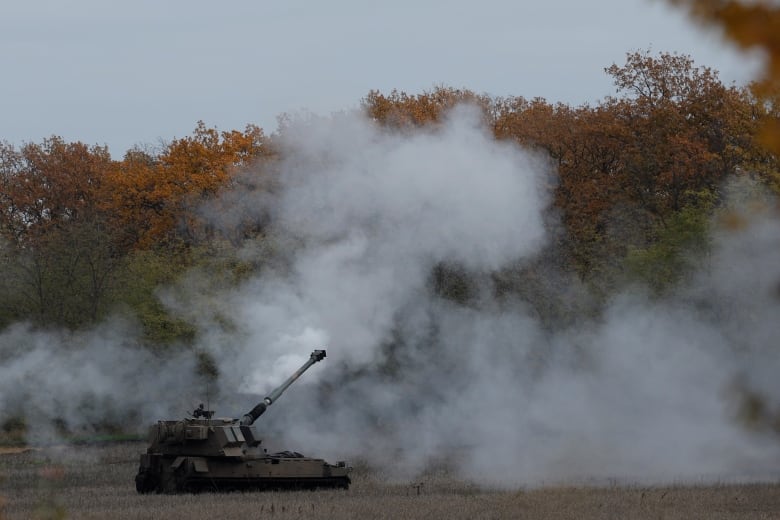 Smoke swirls on a spot near the front lines of the Russia-Ukraine conflict in the Donetsk region on Saturday. Russian troops moved large numbers of sick and wounded comrades from hospitals in Ukraine’s southern Kherson region and stripped the facilities of medical equipment, Ukrainian military officials said, as their forces fought to retake a province overrun by invading soldiers early in the war. (Clodagh Kilcoyne/Reuters)

Ukraine’s Ministry of Infrastructure said that Ukraine has never threatened the Black Sea grain corridor which “is exclusively humanitarian in nature,” and would continue to try to keep shipments going. It said since the first ship left Odesa on Aug. 1, more than eight million tonnes of food have been exported.

Russia also requested a meeting Monday of the UN. Security Council because of the alleged attack on the Black Sea Fleet and the security of the grain corridor, said Dmitry Polyansky, Russia’s first deputy representative to the UN.

Earlier Saturday, Ukraine and Russia offered differing versions on the Crimea drone attack in which at least one Russian ship suffered damage in Sevastopol, a key port on the Ukrainian peninsula annexed by Moscow in 2014.

The Russian Defence Ministry said a minesweeper sustained “minor damage” during an alleged pre-dawn Ukrainian attack on navy and civilian vessels docked in Sevastopol, which hosts the headquarters of Russia’s Black Sea Fleet. 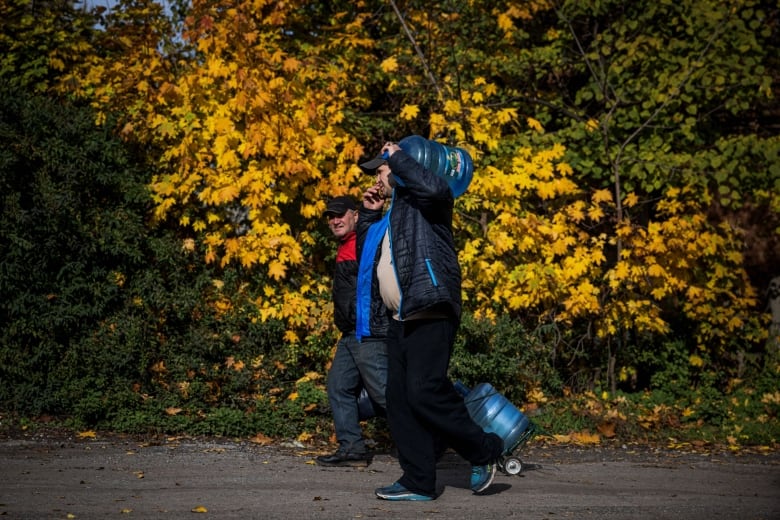 The governor of the Sevastopol region, Mikhail Razvozhaev, claimed the port saw “probably the most massive attack” by air and sea drones. He provided no evidence, saying all video from the area would be held back for security reasons.

But an adviser to Ukraine’s Interior Ministry claimed that the “careless handling of explosives” had caused blasts on four warships in Russia’s Black Sea Fleet.

Anton Gerashchenko wrote on the Telegram messaging service that the vessels included a frigate, a landing ship and a ship that carried cruise missiles used in a deadly July attack on a western Ukrainian city.

In other developments on Saturday, Russian troops moved large numbers of sick and wounded comrades from hospitals in Ukraine’s southern Kherson region and stripped the facilities of medical equipment, Ukrainian military officials said as their forces fought to retake the province.

Kremlin-installed authorities in the mostly Russian-occupied region had previously urged civilians to leave the city of Kherson, the region’s capital — and reportedly joined the tens of thousands of residents who fled to other Russia-held areas. 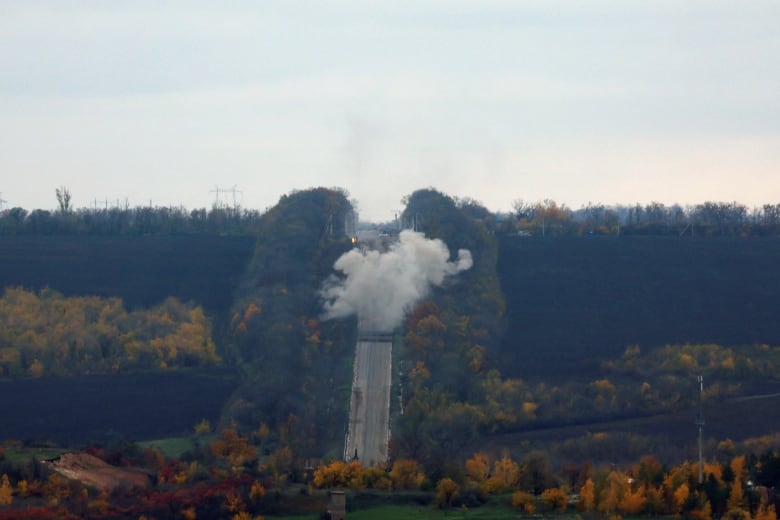 An explosion from a rocket on a main road is shown in Bakhmut on Saturday. (Clodagh Kilcoyne/Reuters)

Zelenskyy said the Russians were “dismantling the entire health-care system” in Kherson and other occupied areas.

“The occupiers have decided to close medical institutions in the cities, take away equipment, ambulances, just everything,” Zelenskyy said.

Kherson is one of four regions in Ukraine that Russian President Vladimir Putin illegally annexed last month and where he subsequently declared martial law. The others are Donetsk, Luhansk and Zaporizhzhia. 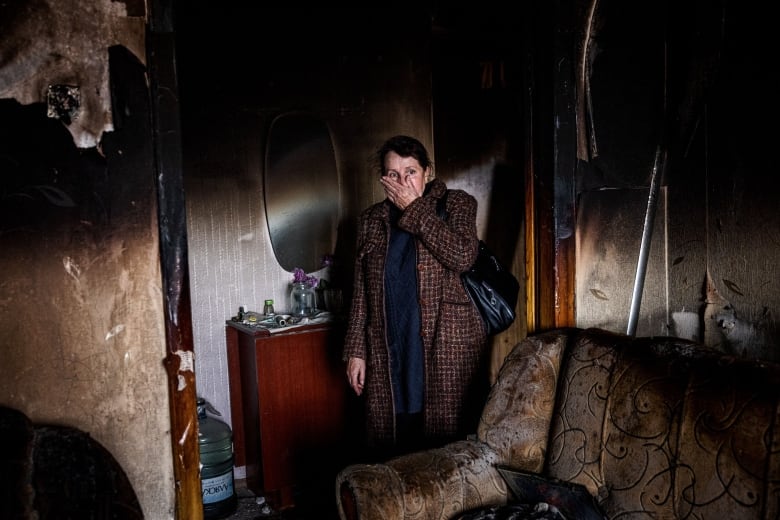 Ukrainian pensioner Lyudmyla Kharchenko, 63, reacts to the damage done to her home in Bakhmut, as a result of shelling on Saturday. Kharchenko had left her apartment to get some bread. When she came back an hour later, she discovered her ruined home and the head of the missile that perforated her living room still warm at the foot of her velvet sofa. (Dimitar Dilkoff/AFP/Getty Images)

As Kyiv’s forces sought gains in the south, Russia kept up its shelling and missile attacks in the country’s east.

Three more civilians died and eight more were wounded in the Donetsk region, as Russian soldiers try to capture the city of Bakhmut, an important target in Russia’s stalled eastern offensive.

In the latest prisoner exchange, 50 Ukrainian soldiers, including two former defenders of the Azovstal steel plant in Mariupol, and two civilians were released Saturday as part of a swap with Russia, who received 50 Russian soldiers, both sides reported. 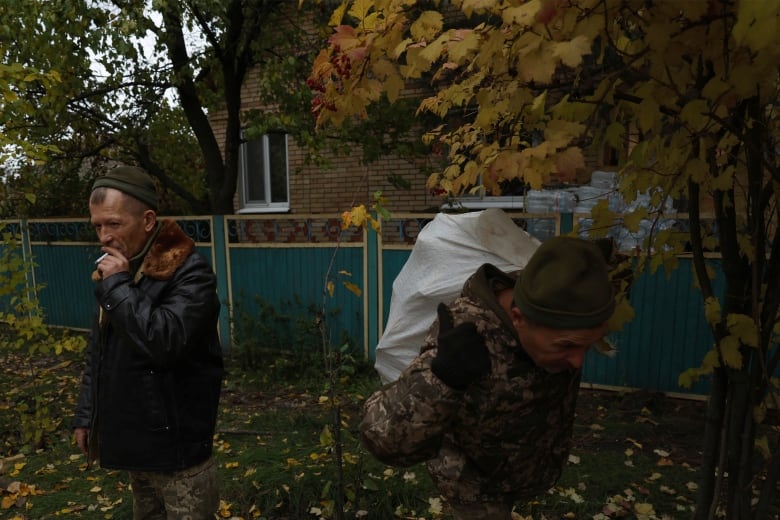 A Ukrainian soldier staying in a village close to the front line carries a bag of chopped firewood in Ukraine’s Donetsk region on Saturday. (Clodagh Kilcoyne/Reuters)