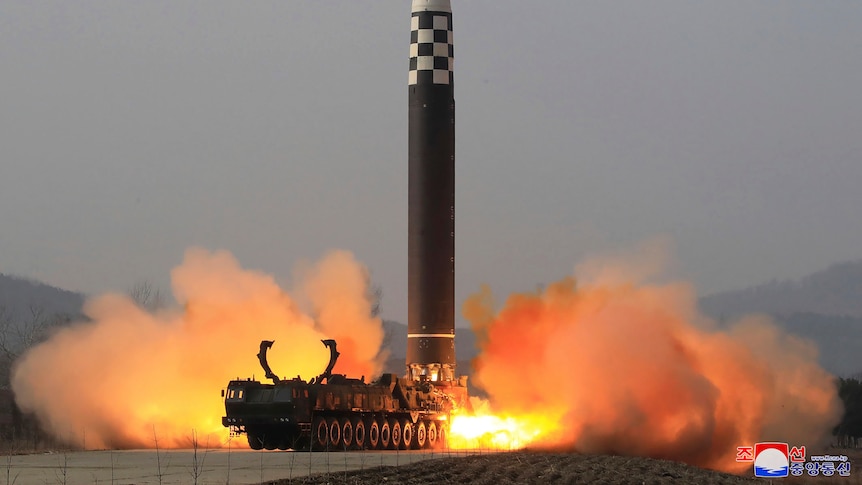 The United States and its allies have clashed with China and Russia over North Korea’s missile launches and American-led military exercises in South Korea, again preventing any action by the deeply divided United Nations Security Council.

US ambassador to the UN Linda Thomas-Greenfield said North Korea’s “staggering 59 ballistic missile launches this year”, including 13 since October 27 and one that made an “unprecedented impact” about 50 kilometres from South Korea’s shore, are about more than advancing Pyongyang’s military capabilities and seek to raise tensions and stoke fear among its neighbours.

She said 13 of the 15 UN Security Council members had condemned North Korea’s actions since the beginning of the year.

But Pyongyang has been protected by Russia and China who have “bent over backwards” to justify repeated violations of UN sanctions by the Democratic People’s Republic of Korea, or DPRK, the country’s official name, she said.

“And, in turn, they have enabled the DPRK and made a mockery of this council,” Ms Thomas-Greenfield said.

China’s UN ambassador Zhang Jun countered that the DPRK missile launches were directly linked to the re-launch of large-scale US-South Korean military exercises after a five-year break, with hundreds of warplanes involved.

He also pointed to the US Defense Department’s 2022 Nuclear Posture Review, which he said envisages the DPRK’s use of nuclear weapons and claims that ending the DPRK regime is one of the strategy’s main goals.

Russia’s deputy UN ambassador Anna Evstigneeva blamed the significantly worsening situation on the Korean peninsula on “the desire of Washington to force Pyongyang to unilaterally disarm by using sanctions and exerting pressure and force”.

She called the US-South Korean exercises that began on October 31 unprecedented in size, with about 240 military aircraft, and claimed they are “essentially a rehearsal for conducting massive strikes on the territory of the DPRK”.

All sides agree on renewed talks

Ms Thomas-Greenfield responded to claims by China and Russia that the military drills were stoking tensions on the Korean peninsula, saying: “This is nothing but a regurgitation of DPRK propaganda.”

She said the longstanding defensive military exercises “pose no threat to anyone, let alone the DPRK”. The majority of the recent tests were mostly of short-range nuclear-capable missiles.(AP: Ahn Young-joon)

“In contrast, just last month, the DPRK said its flurry of recent launches were the simulated use of tactical battlefield nuclear weapons to ‘hit and wipe out’ potential US and Republic of Korea targets,” she said.

“The DPRK is simply using this as an excuse to continue to advance its unlawful programs.”

The Security Council imposed sanctions after North Korea’s first nuclear test explosion in 2006 and tightened them over the years, seeking to rein in its nuclear and ballistic missile programs and cut off funding.

In May, however, China and Russia blocked a Security Council resolution that would have toughened sanctions over the missile launches, in the first serious rift in the council over the sanctions against North Korea.

That rift remains and appears to have grown deeper, but Russia, China and the United States did agree on one thing — the need for renewed talks and a diplomatic solution to the growing crisis on the Korean peninsula.

Mr Zun called on the United States “to stop unilaterally playing up tensions and confrontation” and respond “to the legitimate and reasonable concerns of the DPRK to create conditions for the resumption of meaningful dialogue”.

He said the Security Council, rather than seeking additional pressure on the DPRK, should contribute “to the restart of dialogue and negotiation and resolving the humanitarian and livelihood difficulties faced by the DPRK”.

Ms Evstigneeva said further sanctions would threaten North Korean citizens “with unacceptable social, economic and humanitarian upheavals”, and reiterated the need “for preventive diplomacy and the importance of finding a political diplomatic solution and real steps by Washington, more than just promises to establish substantive dialogue”.

Ms Thomas-Greenfield said even in the face of North Korea’s escalating missile launches, “the United States remains committed to a diplomatic solution” and has conveyed its request to the DPRK for talks at all levels of the US government.

“Despite a lack of engagement from Pyongyang, we will continue to pursue meaningful dialogue,” she said.