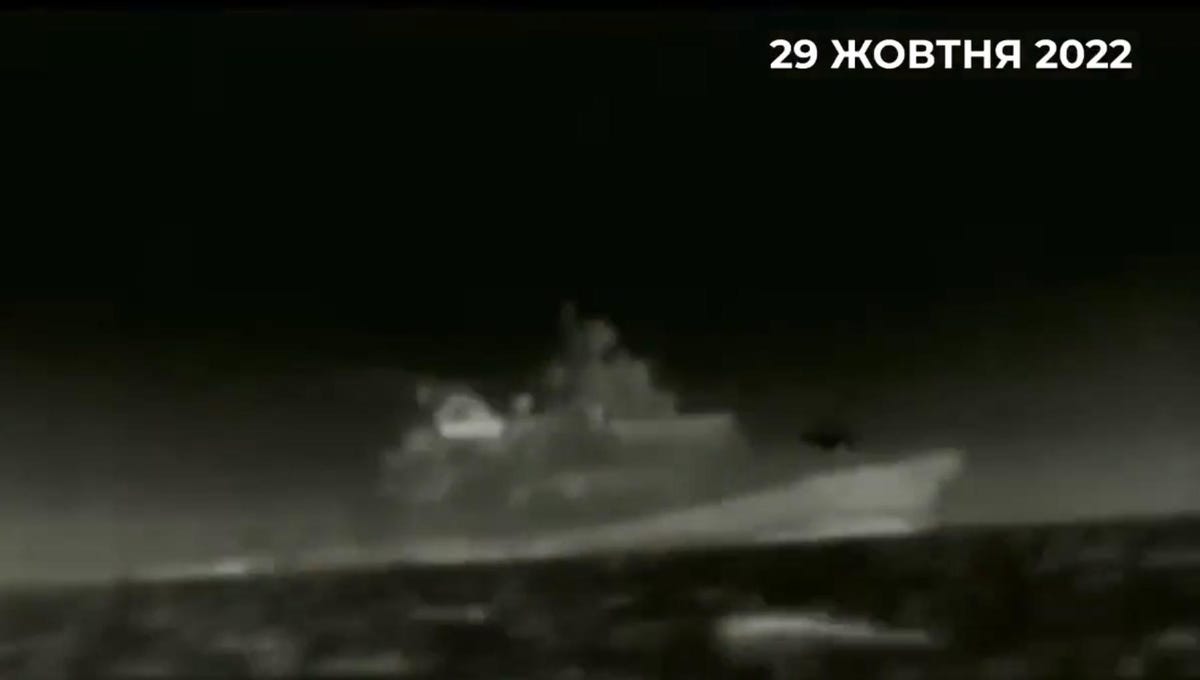 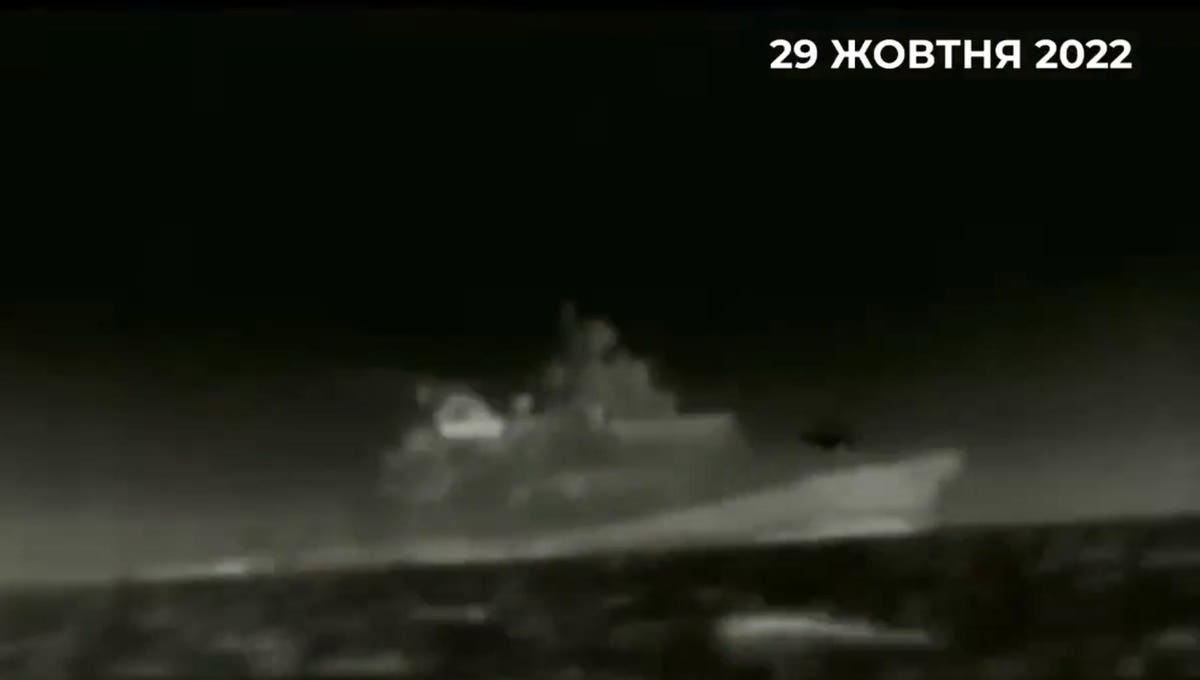 On the morning of October 29, warships of Russia’s Black Sea Fleet based at Sevastopol found themselves assailed by sixteen kamikaze robots. By Russia’s own account, extensive cannon and missile air defenses on land and Russian warships shot down nine Ukrainian drones.

Russia initially claimed it had defeated the attack without damage, much as it had denied the successful strike on its flagship missile cruiser Moskva right up until after it sank. Never mind the smoke seen rising from Sevastopol’s harbor.

Indeed, internal Russian reports indicate both were damaged, with the Makarov’s radar knocked out and the Ivan’s hull holed.

The Makarov may have been singled out for launching Kalibr land-attack cruise missiles to bombard Ukrainian cities, though the Black Sea Fleet still has many other ships that can mount Kalibr missiles. You can read more about the Admiral Makarov’s status and the Russian Navy’s calamitous fortunes in Black Sea in this companion article by David Axe.

Between that and its multiple radar and sonar sensors, it theoretically should have had the means to detect and destroy the incoming small USVs. Russia officially admits minor damage to the vessel, while an anonymous Ukrainian official told the New York Times NYT it had sustained severe damage, possibly crippling it.

Unlike the black-and-white recording, the color-camera USVs have clearly been detected, with helicopters, ships and boats spraying machinegun and cannon fire at them. Given how the video is edited (ie. none are close enough to ram a ship), it seems likely Russian defensive fire managed to destroy these USVs. At one point, the USV either intentionally or inadvertently narrowly avoids colliding with a Russian boat.

Sapliyenko claims at least three Russian warships capable of carrying Kalibr missiles were hit by the attack, adding “There is a good chance that several ships are not just damaged, but sunk.”

The simultaneous air-and-sea attack is clearly a deliberate strategy intended to over-saturate and distract the theoretically extensive multi-layered defenses around these warships. Thus, while the air attack and most of the USVs may have been destroyed before they could hit anything, they almost certainly created the conditions allowing at least two USVs to evade notice and strike Russian ships.

It’s unclear for now how serious the damage from the attack is, and a repeat of the Moskva’s dramatic sinking seems unlikely given the proximity of nearby repair facilities. However, the attack will undoubtedly disrupt Russian surface naval operations, which were already heavily geographically curtailed following the sinking of the Moskva by Ukrainian land-based missiles.

Russia has retaliated by suspending its participation in a Turkey-brokered initiative with Ukraine guaranteeing safe passage through the Black Sea for Ukrainian grain ships, a move again threatening global starvation. This deal would otherwise have expired November 19. Moscow justified its withdrawal by claiming the attack on its warships violated an arrangement for safe passage of civilian grain shipping. The Kremlin was already threatening to withdraw, however, due to complaints over sanctions-related difficulties it had selling grain abroad.

ISTANBUL, TURKEY – OCTOBER 14: Ships, including those carrying grain from Ukraine and awaiting … [+] inspections are seen anchored off the Istanbul coastline on October 14, 2022 in Istanbul, Turkey. Under the terms of the Black Sea Grain Initiative, which paved the way for Ukraine to safely ship grain from three key ports, vessels must be inspected by a team of officials from Turkey, Ukraine, Russia and the United Nations the lengthy inspection process has caused a shipping traffic jam, with some ships waiting days at anchor off the Istanbul coast for inspection teams. The Joint Coordination Center (JCC) has increased the number of inspection teams to try to speed up the process and clear the backlog. (Photo by Chris McGrath/Getty Images)

Re-imposing a Russian blockade on Ukrainian grain shipping could be difficult without deploying ships far beyond Sevastopol and thereby exposing them to attack. However, Russia could turn to submarines, naval attack aircraft, or long-range Bastion-P land-based anti-ship missiles to harry grain shipments departing from Odessa.

Russia has blamed British “specialists” for the attack, as well as for sabotage of the Nordstream I undersea pipeline generally believed to have been perpetrated by Russia itself. The UK is known to have transferred drone submarine minehunters (launched in turn from uncrewed drone boats) for demining activities near the mouth of the Danube, but not offensive kamikazes as far as is known.

In a bid to preserve dignity, Moscow often claims its shocking military setbacks in its invasion of Ukraine are the result of covert NATO forces in Ukraine. However, there’s also no denying that NATO surveillance assets operating outside of Ukraine have provided intelligence which has been hugely beneficial for planning Ukrainian strikes.

Back in September a curious robotic boat was found run aground near to the shoreline of Sevastopol, the main base of Russia’s Black Sea Fleet. After photographing the mysterious boat, the Russian Navy towed it back into the water and blew it up—a disposal method certainly reinforcing theories that this USV had been built in Ukraine to mount kamikaze attacks on Russia’s Navy.

One analysis calculated the boat may have had a radar cross section of just .6 square meters—smaller than that of a submarine periscope, though still detectable from miles away if actively searching.

Theoretically, the crashed USV should have warned Russia’s Navy of the possible threat of kamikaze attacks from Ukraine’s purely coastal Navy. After all, the Black Sea Fleet has numerous small boats, and even a unit of trained killer dolphins, specifically designed to guard against sabotage attacks from NATO naval special operations forces, including frogmen and small watercraft. Clearly that foreknowledge did not result in sufficient countermeasures.

It was also then unclear whether Ukraine had many more of the heretofore unknown robot USVs beyond the one lost in September, or whether that represented an unsuccessful, one-off ploy. Maintaining long-distance radio control links with drone surface vehicles is much more difficult than with aerial drones, and the crash of the USV in Sevastopol might suggest the Ukrainian design was technically immature.

However, the coordinated attack on October 29 implies Ukraine produced at a minimum eight of the USVs—and leaves a question mark on how many more it may have in reserve, or can quickly produce.

Uncertainty as to whether Ukraine can repeat such a strike will complicate Russian naval planning going forward, even as maintaining maritime supply lines to Crimea rises in importance due to the crippling of the railroad bridge connecting mainland Russia to Crimea over the Kerch Strait earlier in October.

Ukraine’s at least partially successful USV assault also marks an unprecedented breakthrough for uncrewed surface vessels. During World War II, harbor attacks were undertaken by frogmen, commandos in launches and mini-submarines. These high-risk/high-reward ops sometimes resulted in massive damage to target ships, but also often ended with the capture or death of the commandoes—even when successful! Japan furthermore employed kamikaze torpedoes and motor boats at the end of World War II.

Uncrewed USVs now emerge as a viable method to launch such attacks without exposing human crew to likely death or capture. Admittedly, Ukraine’s kamikaze USVs in some ways seem comparable to a torpedo—but they likely traversed much greater distances from their launch point to target and can be employed more flexibly.

Once again, Putin’s invasion of Ukraine has led to the innovation and combat-testing of a robotic weapons formerly confined to theoretical wargames and exercises.