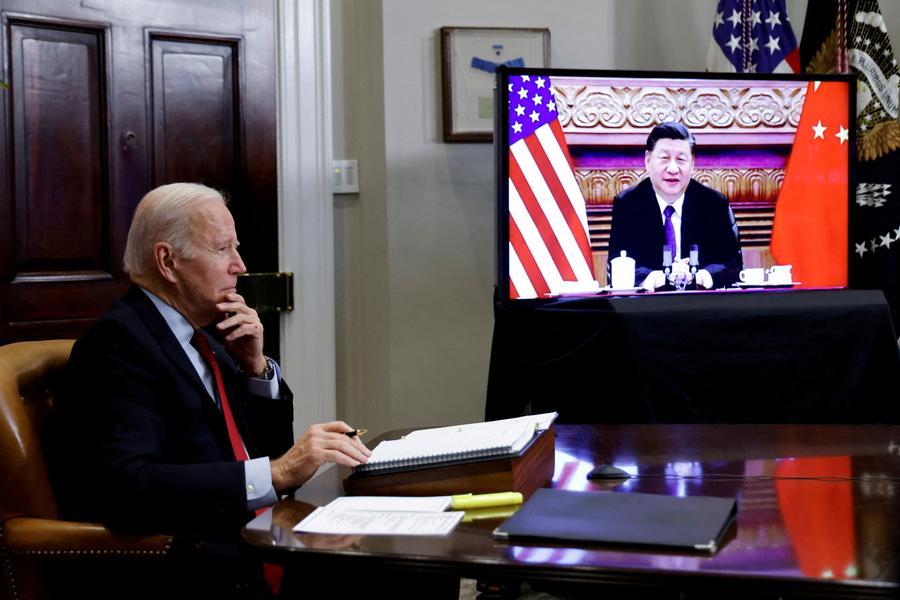 U.S. President Joe Biden will meet Chinese leader Xi Jinping in person on Monday for the first time since taking office, with U.S. concerns over Taiwan, Russia’s war in Ukraine and North Korea’s nuclear ambitions on top of his agenda.

The long-awaited in person meeting comes as relations between the superpowers have sunk to their lowest in decades. The two will meet on the Indonesian island of Bali ahead of the annual Group of 20 (G20) summit gathering leaders of the world’s major developed and emerging economies.

Biden goes into the meeting on the back of a major domestic victory with Democrats clinching control of the Senate, while Xi secured an unprecedented third term in office last month.

“I know I’m coming in stronger but I don’t need that. I know Xi Jinping, I spent more time with him than any other world leader.” Biden told reporters in Cambodia on Sunday after the Senate results.

“I’ve always had straight-forward discussions with him. There’s never any miscalculation about…where each of us stands.”

The U.S. president, who is on a whirlwind trip with stops at an international climate summit in Egypt and an ASEAN meeting and the East Asia Summit in Cambodia ahead of G20, is hoping to build a “floor for the relationship” with China and ensure there are rules that bound competition between the two nations.

Biden recently said he was unwilling to make any fundamental concessions when he meets Xi, and that he wanted both leaders to lay out their “red lines” and resolve areas of conflict.

The meeting is unlikely to produce concrete results and no joint statement is expected, the White House has said, but it could help stabilize a relationship marked by growing tensions in recent years over a host of issues ranging from Hong Kong and Taiwan to the South China Sea, coercive trade practices and U.S. restrictions on Chinese technology.

Biden and Xi, who have held five phone or video calls since Biden became president in January 2021, last met in person during the Obama administration. U.S. ties with China are at a low, most notably since U.S. House Speaker Nancy Pelosi’s August trip to Taiwan, the self-governed democratic island that Beijing claims as its territory.

“This in-person meeting presents an opportunity to dial down tensions and seek ways to manage competition,” said Bonnie Glaser, an Asia expert at the German Marshall Fund.

RELATIONS DATE OVER A DECADE

The two leaders know each other well, having travelled over 17,000 miles together and spent 78 hours in meetings, according to Biden’s calculations. They have travelled together in the United States and China in 2011 and 2012 when both were serving as their respective countries’ vice presidents.

The Chinese president has also suggested that Washington wants to stifle Beijing’s growing influence as it tries to overtake the United States as the world’s largest economy.

Monday’s meeting on the sidelines of a meeting of Group of 20 leaders in Bali, Indonesia, comes weeks after the Biden administration unveiled a new national security strategy that sees an increasingly authoritarian China as the most consequential challenge to the global order.

“The Biden administration will try to kill two birds with one stone – enlist Chinese support on issues like reining in North Korea and climate change – to create some basis for cooperation between China and the U.S.,” said Oriana Skylar Mastro, a China expert at Stanford University.

Xi, fresh off the heels of a Communist Party congress that cemented his power, will press Biden to commit to maintaining stability in relations with China and to respecting the status quo on Taiwan, said Li Mingjiang, associate professor at S. Rajaratnam School of International Studies. The two could also reopen some working-level mechanisms for bilateral consultations on trade and other issues, he said.

Biden will also discuss Moscow’s invasion of Ukraine and plans to be “unapologetic” in his defence of Ukraine, U.S. officials said last week.

China has largely refrained from criticising Russia’s war but thus far has held off on supplying Moscow with arms, according to U.S. officials. Russian President Vladimir Putin will not attend the G20 summit.

Biden will also warn Xi that North Korea’s continued pursuit of weapons development will lead to an enhanced U.S. military presence in the region, the White House said.The United States is concerned that North Korea plans to resume nuclear bomb testing for the first time since 2017 and believes China and Russia have the leverage to persuade it not to do so.